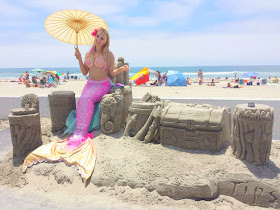 Against a backdrop of rolling waves and San Diego sun on the peak mainline of the PB boardwalk, a low-key 'dude' in his 30s scratches away at a grand, nearly 1-ton sand-packed sculpture of an ornate conch shell. A ball cap, sunglasses, and dark tan are the uniform of a man spending full days on the outskirts of prime beach real estate, lugging carts filled with buckets of sand and seawater up from the surf and sculpting large and very temporary modern artworks.

JT Estrela was born in North Dakota, but mainly grew up near the atlantic beaches of Jacksonville, FL. Artistic endeavors were only musical – playing the violin as a child – until his mid-twenties when on a beach trip with friends furnished a creative spark. As beach days go, full of random acts of connecting with the beloved environment, JT began mounding up sand, crafting abstract miniature architecture from the generously-formable, special brand of earth. Besides his curious hands, only a butter knife (brought for snacks) was used for more intricate details.

In JT's humble reflection, his first attempts were "pieces of crap"(no doubt in unavoidable comparison to his more recent, very accurate depictions of everything from nature to comic strip characters), but a book of photos from his start-up days shows him working on castles that are indeed impressive, especially in their geometry, as he used no molds but simply hand-form and 'chisel'. He had yet to learn the nuances of the science he has now cultivated - small things, such as keeping water on hand to add for solidarity. JT says it was really just luck that his structure began to come together, as it was purely intuitive that first time. "All I did was just make a big pile like this [he quickly gets down on his knees near his station and, forearm-deep, begins mounding sand]. I guess I got lucky because it was moist enough and kinda held its shape." And, simultaneously, an act of presumably-fleeting amusement began to form itself into something significant as well. "Just because I thought it was so much fun." 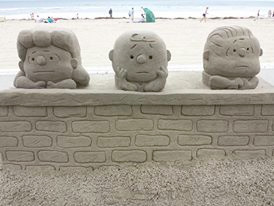 After grad school, where JT received his masters degree in education (atop his bachelor's in mathematics), he jumped coasts to San Diego's Ocean Beach, where he stayed for a 5-year stretch, contributing his newfound hobby to the renown loose environment. He recounts how things really clicked:

"I was a block and half from the beach, so I would go to the beach a lot. Plus, I was single at the time, and when you're building sand castles, ladies would always come by and be like, 'hey, whatcha doin'?" All of a sudden, I'm the interesting guy, ya know? They came to talk to me! So, yea, it was fun, and motivational to realize it was making an impression." 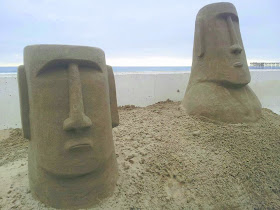 And now, JT will mark his one-year anniversary of his workshop-display at Thomas Ave. and Ocean Boulevard in happening Pacific Beach. JT emphasizes "I have surely refined a lot of my techniques. It took me months [since being here] to figure out that I can just cover [the statues] up. I can just wrap 'em up and leave it there and then, I have a much better chance to have them appear for while."

JT struggled a bit at first, trying to make new pieces every day, and suffered in exhibit and donations since a large portion of the day was devoted to build-up, with recognizable art not forming until later in the afternoon. Leaving them unprotected when he left 'the office' also exposed the structures to become more fleeting than he could keep up with. 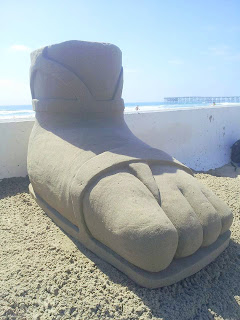 "Every night they would get wrecked. Every night, by somebody." An admirability surfaces as JT displays positivity and perseverance in his moderate expression of a discouraging blight in action; one that, paradoxically, contrasts the creativity and service he embodies. The late-night, malicious destruction of his sculptures is something JT has endured (and faithfully pressed on from) countless times over since stationing in PB, but he says it's only been about 4 times that vandals have made efforts against his art since learning to cover and protect them when he's gone. His pleasant, un-wavered confidence in and devotion to his fellow man is illustrated by his willingness to still at times leave his work un-veiled, such as when he has fully completed a piece or needs a few days off or out of town.

"The only thing that is gonna work, is neighborhood-watch style. Like, if ya see anybody touching this stuff that isn't me, just tell them to knock it off if you feel like it. But I would never want anyone to get into a fight." 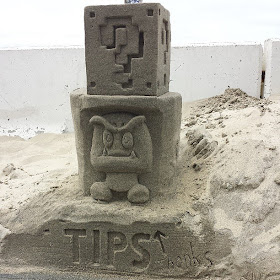 Additional aspects that contribute to the charm of JT's dynamic exhibit, besides his candid manner, include a signboard for displaying messages to passerby while he's immersed in sculpting, and a photo album for showing his development and the scope of his work. Particularly attractive are JT's trademark donation receptacles, which have amounted to legitimate sand sculptures themselves, complete with hollow interior, hole atop for receiving money, and impressive hand-etched typography done with only eye-measurement (no straight-edge or ruler).  Although donations are of definite value to his time and energy-costly endeavors, JT is cool in his refrain from making the monetary support feel obligatory.

And to help flourish his art, he engages the simultaneous challenges and inspirations inherent in competition. For the past 5 years, JT has varied from his typical solitary practice and began overseeing a team in the US Open Imperial Beach Sandcastle Competition. Though the Imperial Beach competition has been scrapped, he will engage fellow sculptors again this August (Labor Day weekend) in The Sandcastle Sculpting Challenge, an invite-only competition at the B Street Pier in Downtown San Diego. 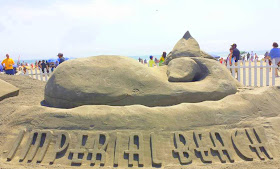 While the rewards of granting receptive San Diego locals and visitors with a unique brand of art really encourages JT, he also recognizes the importance of maintaining the fairness, reciprocity, and sustainability inherent in gaining donations for his open art. Yet JT accepts a possible sobering reality that his fun-in-the-sun creating earth-art in flux may be insufficient for a desirable income. And he swaps hats dramatically, pending to trade his bathing suit for a business suit in his current studies to become an actuary. When prompted about the role sand art plays for him, he enigmatically muses, "I kinda like, ya know, made a fuckin' lemonade stand… Life handed me lemons, I made a lemonade stand." Though consciously providing levity and understatement of his artistic service, a childlike twinkle of pride shows through. 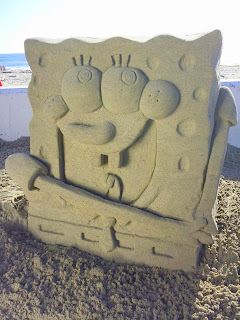 There's an inkling that a main reason behind this satisfaction is the ultimate location of his 'stand'. Regardless of adequate financial compensation, JT's contentedness with his place of business is full-on:

"Well not only is this my city, my home, and I love this place; the weather is fantastic, the sunshine… look at this place" as he pans around, smile glaring. "There are a lot of beautiful people passing by all the time. The people-watching is just fantastic out here; like, ya can't beat it. There's a lot of traffic and tourists that come through here. Tourists come to San Diego, and it's the tourists that are looking to have experiences, and, like, see some sandcastles!"

And JT shows clear excitement as he relays the reassuring interactions experiences each day, and even though portions of his audience who tip are small, he acknowledges that, just as with the vandalism, it's a reality whose remedy is likely beyond the scope of any practical methods he can take at this point: 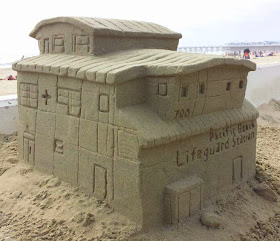 What airs very refreshing and virtuous about JT is his courageous acceptance of stark realities, renunciation of attachment to desired outcomes, and recognition of and immersion into his role for 'the now'. He is of full realization that he may have to eventually transition from his adult sandbox to a sobering position behind desk and calculator, and he seemingly does, to a degree, lament the prospective departure, yet it remains perfectly pleasing the way in which he continues to carry out his craft with tenacity, deft, and content. 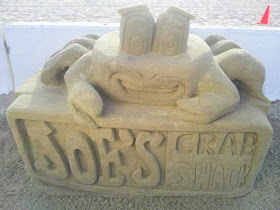 "People ask me 'where's a good place to get something to eat?' All the time, whenever someone asks me this, I always have to take the opportunity to mention that Joe's Crab Shack, as 'corporate' or 'chain' as they are, the managers there are super-freakin' cool, and they've given me storage to use in their garage for free. They let me store all my stuff: my wagon, my equipment. They let me store it there, just because they're cool. They could have easily said 'no', just to be done with it and not have to have any kind of pain in the ass, but they didn't. They're like, 'Yea, we got space. We can clear this out, and…' The management at Joe's is really down-to-earth; no 'corporate'-mentality. So props to Joe's for that."

"Papa Luna's is one of my favorite little places in PB. Empanadas! I like Papa Luna's. It's unique; like the only empanada joint around here, and they're always changing up their menu. It's gonna be about 9 dollars for three empanadas, which is the magic number; four is too many, two isn't quite enough. It's on Garnet, across from Play It Again Sports. What do I always get? The 'Sunny Goat'.. it has goat cheese, Italian sausage, and sun-dried tomatoes. Yea, I like Papa Luna's. I do. And it's not a hugely well-known place. I'm sure none of the tourists have ever heard of it, but it's a good little shop."

Be sure to check out JT's sand art at the end of Thomas Ave. on Ocean Front Walk, and feel free to reach out via email or in person for observational lessons in sand sculpting.  For more information and photos, follow his San Diego Sand Castles Facebook page and visit JT's website at sandiegosand.com.
‹
›
Home
View web version