Some people prefer vodka, some tequila, some rum, and all were welcome at the 5th annual San Diego Spirits Festival - a showcase of the latest and tastiest liquors available on the market. The unique event, named as one of the top 5 cocktail festivals in the United States by Fodors.com, gave patrons a chance to wet their whistle, with everything from shots of high-quality whiskey to fruity vodka concoctions. The San Diego Spirits Festival highlights the cocktail and culinary community and the talented bartenders and chefs who are shaking up San Diego's vibrant scene. We had our chance to get tipsy at the two-day event and it's safe to say that our palates were elevated - pre-mixed margaritas and Smirnoff just won't cut it anymore. 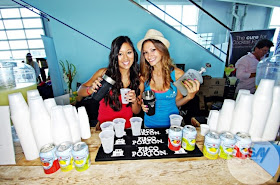 We arrived at the event at the Broadway Pier Pavilion on the first day of the festival and were promptly stopped at the first and most cleverly located booth at the show: PREFUNC. Prefunc is essentially a 2oz hangover preventer. While I'm usually a skeptic of products like these, I figured it was best to give it a whirl before enjoying numerous varieties of shots and drinks.   After fueling up with some extra nutrients, it was time to move on to the main event.

The San Diego Spirits Festival is unlike any event we've been to before. Where else can you sample dozens of the highest-quality liquors, cocktails and craft beers without worrying about breaking the bank? Throughout the sunny afternoon we made the rounds, and tried some of the most unique concoctions we've had to date. Among our favorites were Dirty Tequila's Dirty Dreams, a mix of dirty tequila, butterscotch schnapps, chocolate syrup and caramel sauce (essentially an alcoholic milkshake - genius!) and Dulce Dorado Tequila, which blends honey and vanilla flavors. 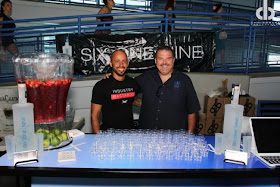 The complete stand out of the event, however, was BuzzBallz. BuzzBallz are 200ML ready to drink mixed drinks that come in a unique ball-shaped can that is freezable, floatable and recyclable. Each of the balls is made with 100% juice and they come in a variety of flavors including pineapple colada, lime 'rita, lemon chiller and sour apple. After getting a taste, it was clear what my poolside summer had been missing.

By 2:30 the crowd had picked up, the drinks had kicked in and the event was in full swing. Drop Dead Dames Burlesque provided entertainment for the event as Brazilian Carnival Samba Dancers worked the crowd and spiced things up. Patrons also had the chance to meet and take photos with MÖTLEY CRÜE front-man Vince Neil, who headlined the event with the launch of his Tatuado Vodka.

In the back, bartenders who won previous cocktail wars held at J Six, the W Hotel and the Hilton Resort, showed off their mixology chops in the final showdown. Participating bartenders included: 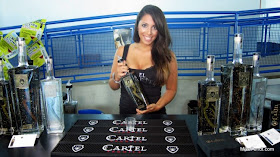 After a few hours, our hunger started to kick in, but we were a bit underwhelmed with the culinary showing at the festival. Given the nature of the event, we expected a few more options when it came to dining. After all, drinking on an empty stomach is never a good idea. While a few of the booths had crackers and small snacks, the culinary tent on the back pier didn't have as much to offer as we expected. The chef demos also fell short, as one chef struggled to entertain the crowd while fileting open blue cobia. We heard some comments throughout the crowd expressing a similar sentiment. Though the festival is primarily a showcase of spirits, it could really be taken to the next level by adding more food vendors in years to come.

Overall, we found the San Diego Spirits Festival to be a great industry event where seasoned bartenders get to show off their skills and newbies can learn a few tricks. It also presents a great opportunity for local bartenders and So-Cal based liquor companies to promote their restaurants and products. While some of the appeal may be lost on your average drinker, the event showed that San Diego may also soon take the title of cocktail capital of the US. To learn more about the San Diego Spirits Festival and ongoing cocktail wars, visit http://www.sandiegospiritsfestival.com. And if you want to impress at your next dinner party, take down the recipes of the winning cocktails below.