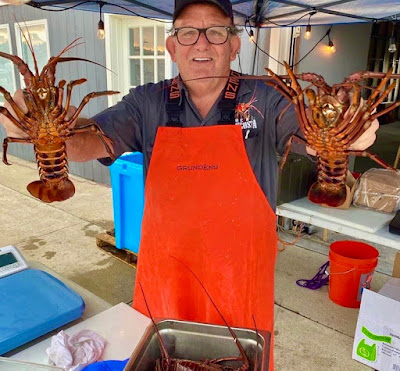 One of San Diego's most well-known food personalities, Tommy Gomes, has announced he will host a new television program dubbed The Fishmonger about the American commercial fishing industry. Gomes will also be opening Tunaville seafood market next year in Point Loma in partnership with the founder of Mitch's Seafood.
Premiering on The Outdoor Channel on March 1, 2021, The Fishmonger will feature 4th generation commercial fisherman Tommy Gomes as the lead host. Tommy will connect with incoming boats, local seafood markets, area chefs and the general public and show how San Diego commercial fishermen have adapted to advanced methods of harvesting fish and shellfish while minimizing the impact on non-targeted species. Each episode will include an area chef preparing local catch, demonstrating how to utilize the entire fish and showcase some of the more tasty fish that most folks probably haven’t ever cooked…or in some instances even heard of. Scott Leysath, host of The Sporting Chef and Dead Meat on Sportsman Channel and Outdoor Channel is also a co-host, executive producer and director. Sacramento-based Sporting Chef Productions and 4MilePost Productions of Huntsville, AL, are co-producing the 8 part series, which will air in approximately 63 countries.
"San Diego, California was once home to the largest tuna fleet in the world," explained The Fishmonger co-host and director Scott Leysath. "Tuna fishing, canning and supporting businesses employed tens of thousands of local residents. Times have changed, along with how we harvest at sea, and the fleet is a fraction of what it was during its heyday. Today, American commercial fishermen are up against increasing odds. These are the farmers of the sea who, in spite in increasing regulations and unfair competition from foreign fleets, have a passion for delivering the best, sustainable seafood to American families. The Fishmonger illustrates how the best fish in the world makes it to our restaurants and dinner tables."
San Diego chefs appearing on episodes of The Fishmonger include Davin Waite (Wrench and Rodent), William Eick (Mission Ave Bar and Grill), Victor Jimenez (Cowboy Star Restaurant and Butcher Shop), Mitch Conniff (Mitch’s Seafood), Sam "The Cooking Guy" Zien, Rob Ruiz and Christina Ng. Local commercial fishermen being featured include The Hawkins Family, Kelly Fukushima and sons, Pete Grillo, Pete Halmay, David and Nick Haworth, Dan Major, Doug Dirkse and others. 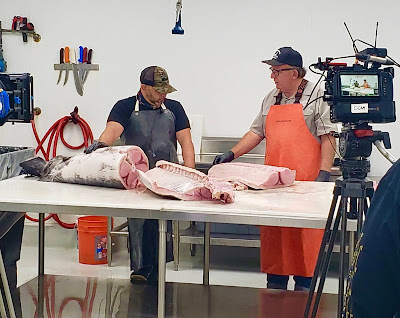 "The local fishermen and culinary community has been extremely helpful with information and their willingness to support the project," continued Leysath. "The fishermen understand that adjustments have to be made to suit environmental challenges, but they would appreciate a level playing field with the international fishermen who often have an unfair advantage over American fishermen. The people who farm the seas are driven to do what they do. Many are third, fourth and fifth generation fishermen who have a passion for commercial fishing."

In addition to supporting the local fishing community and filming The Fishmonger, Tommy Gomes is also working on opening a new seafood market at 4904 N Harbor Drive within Driscoll's Wharf in Point Loma. Gomes is partnering with Mitch Conniff, founder of Mitch's Seafood and longtime tax advisor Viola Kiyohara. The new fish market, dubbed Tunaville Market & Grocers (we love the name!) is not expected to open until late 2021.

A native San Diegan whose Portuguese family settled here in 1892, Tommy Gomes is a fishmonger by blood, coming from generations of professional fishermen. Over his career, Tommy has become an industry leader in seafood education and a true advocate of sustainable sourcing of sealife. Tommy is the founder of the nonprofit dining series Collaboration Kitchen and has been a guest speaker for many culinary programs and specialty meals. In addition to working with some of San Diego's best chefs, Tommy has served uni and swordfish marrow to Bizarre Foods’ Andrew Zimmern and has an Opah breakdown video on Facebook with more than 24 million views. After a 15 year career with Catalina Offshore Products, Gomes stepped down from his public role with the San Diego seafood wholesaler last September to build his own Tommy the Fishmonger brand.
‹
›
Home
View web version