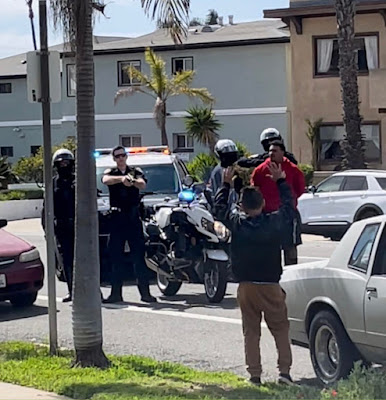 The San Diego Police Department is under scrutiny after a video appears to show an officer aiming his firearm at a child.

At approximately 12:55pm on Tuesday, March 9, a bystander captured video of San Diego Police Department officers making a traffic stop on the 3700 block of Park Boulevard on the outskirts of the Hillcrest neighborhood. SDPD spokesperson Lieutenant Shawn Takeuchi confirmed the situation occurred after officers attempted to conduct a traffic stop on a car that was allegedly traveling at 70 miles per hour, more than 30mph above the speed limit, on Park Boulevard. It was stated that a motorcycle officer requested assistance because the vehicle did not immediately stop, despite the officer turning on his emergency lights and siren. The driver was ultimately issued a misdemeanor citation for reckless driving and the vehicle was impounded. The driver and child were eventually released.

"I witnessed the police officer on the motorcycle with his siren and lights on but the vehicle was already pulled over," explained the witness that captured the videos, who wishes to remain anonymous. "Both the driver's side window and passenger side window were rolled down and the man and boy had their hands outside the window. As I walked by the vehicle I noticed the little boy in the passenger side with his hands outside the window. I turned around and started recording. The officer was pointing the gun at the car [and] used his other hand to direct me to keep walking. I stopped recording and called my lawyer friend who confirmed I had every right to keep recording. So I started recording again." 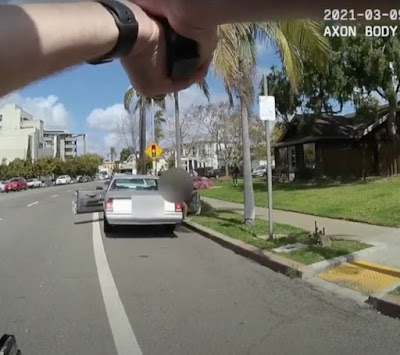 In the video, at least one SDPD officer has his gun drawn as the driver is ordered to exit the vehicle and proceeds to back toward several uniformed officers until he is cuffed and in custody. At that point, the child passenger is asked to exit the vehicle and, as he does so with his hands raised, the officer continues to point his weapon toward the car/child. As the child walks toward the police officers, the driver in custody can be heard saying, "can you take that gun off of him, he's 8 years old." The officer continues to aim his weapon at the car once the child is in another officer's custody. SDPD officers then search the car's trunk.

"From my perspective the officer was pointing a gun towards the child as he was exiting the vehicle," concluded the witness bystander who filmed the occurrence.

The San Diego police insist the gun was never aimed at the child, despite the suspect and witness claiming the contrary. Following the incident, a Psychiatric Emergency Response Team clinician consoled the visibly shaken child.
"My son had to use the bathroom and my shop is right up the street from where I was stopped," explained Anthony Fuller, the man that was arrested in the video and the father of the child. "I was just in Dad mode trying to get my kid to bathroom before he peed himself. I've been stopped by the police for speeding before but I've never been instructed out my car at gunpoint. My kid was crying in the car saying 'dad I don’t want to die. are they gonna shoot us?'. At that point I just told him it would be ok and to keep calm I just wanted him to feel safe in that moment but there was no way I could guarantee his safety. I just gave it all to God and did what I was instructed to do so me and my son could walk away alive. I asked the officer multiple times to lower his weapon because my child was freaking out and I didn’t want him to think that my son was reaching for something and he get shot. It was pointed directly at him."

It is the SDPD's position that due to the driver's failure to immediately stop for officers, it resulted in the situation becoming a "high-risk vehicle stop", which is conducted differently from a "routine traffic stop." During a "high-risk" stop, also known as a "felony" traffic stop, police pull over a vehicle which they have an articulable reason to believe contains a driver and/or passenger suspected of having committed a serious crime, usually of a nature that would lead police to believe the suspect may be armed and dangerous.

"We receive training at the police academy to conduct a high-risk stop with our guns drawn," explained SDPD spokesperson Lieutenant Shawn Takeuchi. "Each officer is required to articulate facts as to why they are conducting a high-risk stop. In this incident, the facts were a vehicle travelling [sic] very excessively and not yielding to emergency lights and siren... I will emphasize this point. The officer’s firearm was never pointed at the child. I am unable to confirm the age of the child."
The below video consists of four separate videos of the incident in their entirety as filmed by one anonymous witness-bystander.

Following the publishing of this article, the San Diego Police Department released body camera footage from the vehicle stop and subsequent arrest. Despite assertions that at no time was the gun pointed at the child, it appears from the video that the gun was aimed in the boy's direction until the arrested driver, who claimed to be his father, stated the child was only 8 years old.

This is developing story. As such, we will update this post as we learn and receive more information.