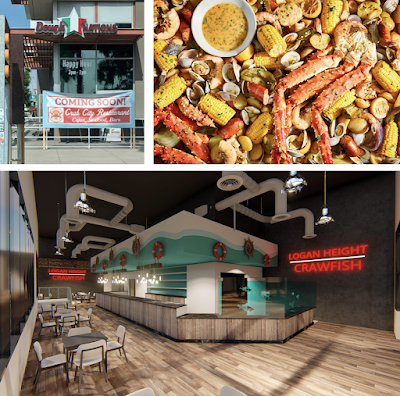 September 29, 2021
Opening in the space that last housed Dough Nations in San Diego's Barrio Logan community is Crab City, a cajun seafood boil restaurant and bar unveiling next month.
From husband-and-wife couple Truc Nguyen and ThuHang Le, who also operate Pho Bo restaurants in Barrio Logan and National City, Crab City is expected to open mid-November within the 2,500 square-foot space previously occupied by Dough Nations pizzeria within Mercado del Barrio. The restaurant will serve a menu of spiced seafood boils, with offerings like crawfish, King crab, shrimp and more. There will also be a central bar serving beer and wine.
"My husband and I have been in the restaurant industry for almost 20 years," explained Crab City founder ThuHang Le "We are running both Pho Bo restaurants in Barrio Logan and National City. We both luckily survived during the pandemic. We took over the restaurant next door and turned in into a crawfish restaurant from a pizza place. The restaurant has a huge free parking, is next to San Diego downtown, and has a patio around both sides, so this would be a very nice place for our customers to enjoy food.
Crab City is expected to open in early-to-mid November at 1985 National Avenue, Suite #1101, in San Diego's Barrio Logan. For more information and updates, follow Crab City on Facebook.
‹
›
Home
View web version