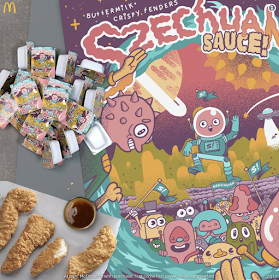 Spawned by enthusiasm stirred up by the popular Cartoon Network animated program Rick and Morty, McDonald's will give out a limited supply of Szechuan Sauce, which was last served in 1998, on Saturday, October 7 as part of a promotion for the company's new Buttermilk Crispy Tenders. The sole location in San Diego that will offer the sauce is located the outpost at 2345 El Cajon Boulevard, so expect huge lines.

On June 19, 1998, to coincide with the release of Disney's animated feature film Mulan, the story of a brave daughter who posed as a man and enrolled into the Chinese military to take her wounded father's place in the fight against the Hun invasion, McDonald's released a limited-time condiment, Szechuan teriyaki dipping sauce. It was created to mimic traditional Chinese Szechuan Sauce, and it came complete with Happy Meal Chicken McNuggets and one out of a set of eight Mulan toys. After the promotion, the sauce was removed from all McDonald's restaurants.

The season 3 premiere of the wildly popular Rick and Morty animated series, which aired unexpectedly without any promotion or marketing, begins with the main character Rick in a dream sequence where he travels to a McDonald's within his memory to experience the taste of the Szechuan Sauce for one last time and the joke continues throughout the episode. Fans took to social media to demand that McDonald's reintroduce Szechuan Sauce to their menu. This summer, McDonald's even sent the creator of Rick and Morty a four-pound bottle of their Szechuan Sauce in a customized suitcase with a comedic letter.

After listening to customers' enthusiasm for Szechuan Sauce over the past few months, McDonald's has revealed the final addition to its gig-style poster lineup designed by artists from Delicious Design League. For the most obsauced fans, McDonald's even produced small batches of Szechuan Sauce dipping packets. The savory and slightly sweet sauce with hints of soy, ginger, garlic, and slight vinegar notes will be available, along with limited-edition posters, at participating restaurants on Saturday, October 7, starting at 2pm, as part of a promotion for the new Buttermilk Crispy Tenders.

Head to University Heights McDonald's at 2345 El Cajon Boulevard to get your hands on this coveted sauce. Only about 100 or so packets will be available, but we've heard that the sauce will reemerge later this year.
‹
›
Home
View web version