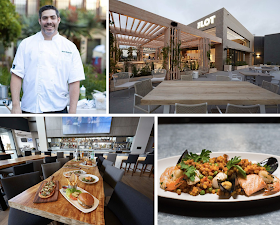 Former Table 926 chef/owner Matt Richman, who last worked as Executive Chef of Beaumont's Eatery in Bird Rock, will take the lead in the kitchen of the La Jolla location of The Lot,  a dining, drinking and cinematic destination.

San Diego native Matt Richman previously owned Table 926 in Pacific Beach (now Ambrogio15) for 4 years before closing it in November 2015. Richman was once on board to take the lead at the onsite restaurant at La Mesa's gigantic incoming Depot Springs Beer Company, but serious delays in the project caused that deal to fall through, so he ended up as the Executive Chef at Beaumont's Eatery for a short stint.

Richman received his culinary education at the California Culinary Academy in San Francisco. While at school, he worked at the highly rated kitchens of the Fifth Floor, Twenty-Four at Pac Bell Park and Kokkari Estiatorio. After graduating in 2001, Matt moved back to San Diego and spent time working at Pacifica Del Mar before taking advantage of an opportunity to move to Miami, Florida and work at the acclaimed restaurant Ortanique on the Mile in Coral Gables. He also spent time at the Nuevo Latino restaurant Chispa, also in Coral Gables. Chef Matt eventually moved back to San Diego and worked as an executive chef at My Place Bistro in La Jolla and Illume Bistro in Little Italy before opening Table 926 in 2011.

Opened in Fall 2015, The Lot features seven theaters, a full bar, a café and a chef-driven, family-style restaurant that is open daily for breakfast, lunch and dinner. The dedicated coastal-casual restaurant will continue to offer organic and vegetarian food options with an emphasis on farm-to-table cooking within an indoor/outdoor restaurant setting, patio, and street-side dining venue. Under Richman's leadership, The Lot restaurant will feature a wide selection of Mediterranean and Mexican-inspired dishes, from small and shared plates, to a variety of Mediterranean flatbreads and inventive large plates.

The Lot La Jolla café is open at 6am daily and serves breakfast, coffee and a vast selection of baked-fresh-daily pastries. The Lot La Jolla restaurant will open for lunch, dinner and after-dinner service, daily, with movie screenings beginning at approximately 11am, and final screenings at approximately 11:30pm. For more information, visit thelotent.com.
‹
›
Home
View web version