A Korean Food Hall Is Opening In San Diego Next Month 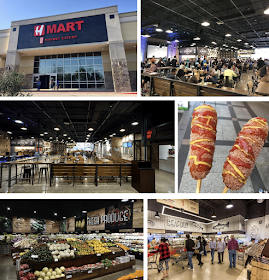 Founded in Queens, NY, in 1982, H Mart is now the largest Asian supermarket chain in the United States with more than 60 locations nationwide. The company already has one location in San Diego, which has been in business in Mira Mesa since 2012.

The new San Diego H Mart will open as early as Friday, June 7, taking over a former Sports Authority location at 7725 Balboa Avenue in Kearny Mesa. The name is short for 'Han Ah Reum' in Korean, meaning "one arm full of groceries." In addition to an expansive market filled with everything from fresh meats and seafood to produce and packaged goods, the space will house a Korean Food Hall with 5 unique concepts.

Onsite eateries will include a branch of Korea’s famous fried hot dog chain Myungrand Hot Dogs. Other options will include stir-fried rice cakes from Sin Jeon Topokki, Korean soul food from Bann Cuisine, Asian fusion from Kangnam Chef, and Korean fried chicken and pork cutlets from Katzya. Unfortunately, unlike other incarnations of the concept, there will not be any liquor component as part of the new San Diego H Mart food hall.

For more information on H Mart, visit hmart.com and check out the flyer below. 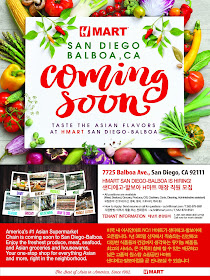