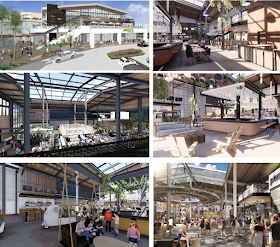 We broke the news last summer that a 20,000 square-foot, multi-restaurant food hall called The Sky Deck would be installing in Del Mar Highlands Town Center as part of the $100+ million redesign of the 30-year-old complex. Details are now being released that the space will house a central craft cocktail bar, a rooftop beer garden, and restaurants ranging from Thai food to Italian pizza.

Donahue Schriber Realty Group CEO Pat Donahue was so inspired by El Nacional in Barcelona, Spain, that he wanted to bring a similar multi-restaurant concept to his company's Del Mar Highlands Town Center plaza. Fast forward a half decade and The Sky Deck is less than a year from completion and already has a most of its future tenants signed on.

Expected to open in spring 2020, The Sky Deck is being coined as "the ultimate date night place," as it will feature 10 unique restaurant concepts housed within the space. Located on the second floor of the plaza above a new and expanded Jimbo's Naturally supermarket, The Sky Deck currently has almost half of its tenants in place, including Ambrogio15 pizzeria, which has a brick-and-mortar eatery in Pacific Beach and a stall within the Little Italy Food Hall. There will also be mini-restaurants from San Diego-based Thai Extraordinary, Le Parfait Paris, and a Mediterranean eatery from the team behind Del Mar’s Beeside Balcony. Scott Slater of Slater's 50/50, who is also in the process of opening two new restaurants in La Jolla, will operate a central cocktail bar called Noblesse Oblige on the base floor, and there will be a rooftop beer garden with tasting rooms from Northern Pine Brewing, Rough Draft Brewing and Boochcraft hard kombucha. Each eatery will range in size from 500-3,000 square-feet and have its own unique areas within the state-of-the-art facility, which will have 25-foot-high window store-fronts, large roll-up glass doors, and a retractable roof.

The Sky Deck is part of an estimated $120 million expansion of Del Mar Highlands Town Center by developer Donahue Schriber Realty Group, which is being called 'The Collection' that will result in the addition of 120,000 square feet of new retail, dining, and public space - bringing the center’s total to 380,522 square-foot. More new restaurants and eateries will be announced as the 2020 unveiling of the reinvigorated plaza nears, but already signed up is Head Lettuce, a new health food concept from Scott Slater, as well as a boutique fitness row and retail tenants such as Diesel, OH! Juice, Cascade Spa, Perlman Wellness Center, and a Brentwood-based bookstore. Jimbo’s Naturally! will also be opening a new store allowing them to grow from 14,000 to 25,000 square feet.

The Sky Deck is expected to open in March 2020. For more information, visit delmarhighlandstowncenter.com and check out the artistic renderings below. 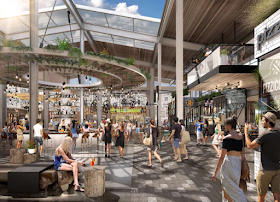 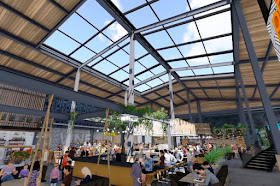 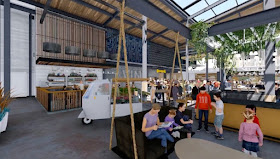 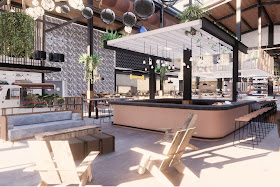