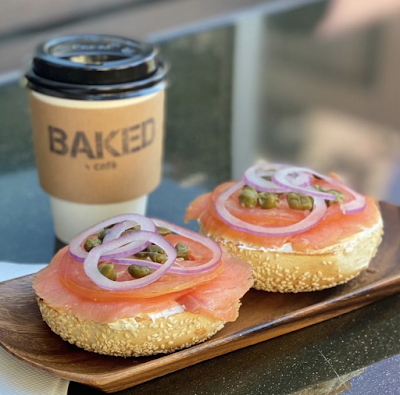 Lutwak, who is the founder of Restaurant.com and CEO of Fit Athletic Club, has opened BAKED in the space where Brooklyn Bagel & Bialy previously sat. Baked offers a menu of East Coast-style boiled then baked bagels that are available with assorted flavors of cream cheese, as a sandwich or breakfast bowl. The eatery also offers lunch options like burgers, pot pies, wraps, Turkish flatbreads, and pastries, as well as coffee drinks, juice and teas. Currently due to restrictions on indoor dining, patrons can take out and also enjoy their meal on two outdoor patios. Based on the success of the first location, more BAKED outposts may pop up at other neighborhoods around San Diego.

BAKED is now open daily from 7am to 3pm at 1000 Island Avenue in downtown San Diego's East Village. For more information and to place an order, visit orderbaked.com and check out the menu below.