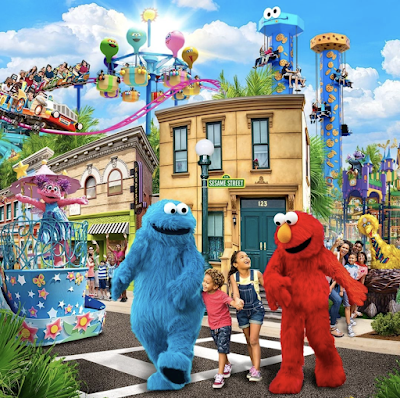 The magic of Sesame Street is coming to America's Finest City, as the second location of Sesame Place theme park will officially open in San Diego in March 2022.

The original Sesame Place amusement park opened in Langhorne, PA on the outskirts of Philadelphia in July 1980 and has been a destination for families across the country for more than 40 years. Officials with SeaWorld Entertainment and Sesame Workshop announced today they are opening the country’s second Sesame Place park in San Diego in spring 2022, a year delayed due to the Covid-19 pandemic. The announcement continues a pivot by Orlando-based SeaWorld away from live animal shows, after the documentary Blackfish, which detailed the tortured life of the orca Tilikum, caused a global outcry and protests. SeaWorld's Orlando park opened a Sesame Street section in early 2019.

The new 17-acre Sesame Place will install in the space occupied by SeaWorld-owned water park Aquatica San Diego, which ended its final season earlier this month. Many of the water park's attractions will be incorporated into the new park. The San Diego Sesame Place will be slightly larger than the Sesame Street park outside Philadelphia and will feature roller coasters, water slides, and other family friendly rides, as well as a daily parade, live shows and character interactions. The park’s opening in San Diego will open the Sesame Street experience to the western United States, as well as to visitors from south of the border.