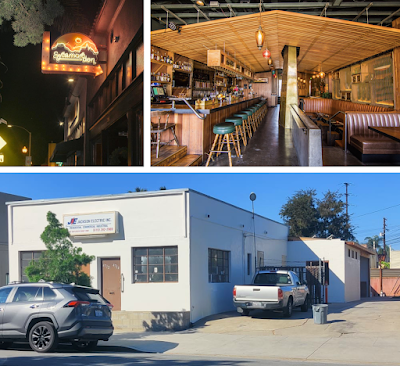 Public records indicate that popular 1970s-style cocktail bar Sycamore Den may be in the process of relocating in San Diego's Normal Heights.

A liquor license transfer is in the works showing that Sycamore Den is seemingly moving a stones throw from its original location into the former Jackson Electric building on Felton Street in Normal Heights. Local bar operator Nick Zanoni, who launched Thruster's Lounge in Pacific Beach when he was only 23, took over the former Lou Jones Inn on Adams Avenue in Normal Heights in early 2013. With the help of local designers Bells & Whistles, later that year Zanoni opened the 1,500 square-foot Sycamore Den, a cocktail lounge inspired by the 1970s dad and built to look like a middle-class family living room.
There is currently a liquor license transfer processing that will move Sycamore Den's rare Type 48 cocktail-only license across the street and a block up to the standalone building at 4714 Felton Street that long housed Jackson Electric. A look inside the building shows that the interior has already been gutted and there is currently construction to build a back, outdoor patio. We assume the new Sycamore Den will have the same cocktail-fueled hunting lodge vibe as the original. There is no word on what is coming to the original space on Adams Avenue. We reached out to owner Nick Zanoni for comment, but he did not provide a substantive response by the time of publishing.
The original Sycamore Den remains open for business at 3391 Adams Avenue in San Diego's Normal Heights. For more information, visit sycamoreden.com.
‹
›
Home
View web version