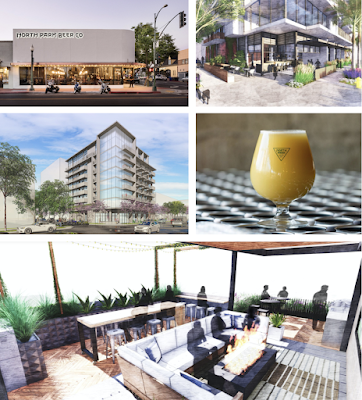 October 17, 2021
San Diego's 5-year-old North Park Beer Company is growing beyond its namesake neighborhood with plans to open a taproom in the Bankers Hill community.

North Park Beer Company was first operated out of founder Kelsey McNair's garage before the full-scale brewery unveiled on the craft-beer saturated 30th Street in the heart of San Diego's North Park in mid-2016. As a home brewer, McNair had racked up prestigious awards, with his Hop-Fu! IPA becoming the most award-winning homebrew recipe in state history. This past September, North Park Beer's Art is Hard Hazy IPA won a silver medal at the prestigious Great American Beer Festival.
There are currently plans in place for a North Park Brewing Company tasting room to open on the base floor of Secoya on Fifth, a mixed-use building being constructed by Bishop Ventures on the corner of 5th Avenue and Redwood Street in Bankers Hill. Specific details on the project are still very limited being it's so early on, so there is no word yet on whether the tasting room will offer a food component. Once finished, Secoya will be a 8-story, 103 micro-unit apartment building with 3,000 square-feet of ground floor retail space, located just steps from Balboa Park. The project is expected to be completed in mid-2022.
The new North Park Brewing Company tasting room will be located at 3067 Fifth Avenue in San Diego's Bankers Hill. For more information about North Park Beer, visit northparkbeerco.com, and head to the original brewery at 3038 University Avenue in North Park.
‹
›
Home
View web version