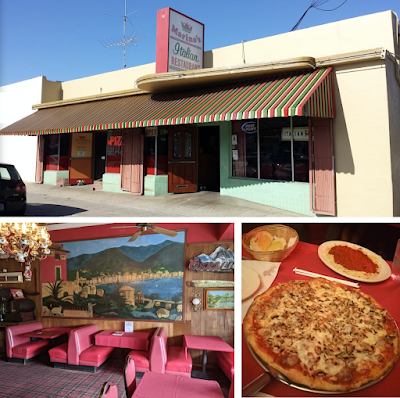 Marino's Italian restaurant was founded in 1954 by Salvatore Marino, who also  owned a Marino’s Pizza in La Jolla and Santee. The family-run eatery was eventually sold to Luigi & Assunta Murino in the mid-1970s and has been managed for the past few years by second-generation owners Mark & Kristin Murino.
Marino's is an old school Italian restaurant that served its last meals on Sunday, October 10. After decades in the Murino family, the business has been sold to new proprietors who plan to perform a complete remodel and reopen it next year as Sauced Pizzeria.
Sauced Pizzeria is owned and operated by Christina Cunningham and will offer Americanized Italian cuisine from Cunningham's nephew, Executive Chef Chad Fields, who previously worked for JC Resorts in Los Angeles. Dishes will range from pizzas and pastas, to organic salads, hearty entrees, and pizzeria-style appetizers, as well as vegan and gluten-free items. There will also be a selection of area craft beers and local & California wines.
Sauced Pizzeria is expected to open mid-2022 at 4475 Ingraham Street in San Diego's Pacific Beach. For more information, follow the restaurant on Facebook & Instagram.
‹
›
Home
View web version