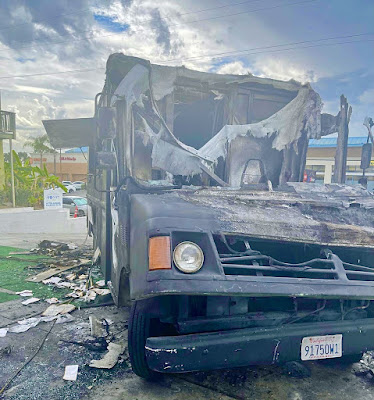 "Over the past week I’ve had break ins and vandalism," explained Rollin Roots founder, Chef Avonte Hartsfield. "I initially thought it was just someone random but two days ago there was a noose hanging from the door to my office by the food truck, as well as someone trying to set the truck on fire. I called the police to investigate but the next day the truck was already burned down completely. They are doing an investigation but with no cameras and no witnesses it looks bleak so currently we can only piece together what we have but can’t find out specifically what’s going on."
Chef Avonte Hartsfield started his Rollin Roots concept in 2019 as The Source, a pop-up vegan food vendor at area farmers markets. Although he originally planned to open a full-scale restaurant, the pandemic and subsequent restrictions forced him to modify his business plan and after raising nearly $20,000 on GoFundMe in May 2020, launched the Rollin Roots vegan food truck in August 2020, offering a menu of plant-based comfort foods. This past June, Hartsfield also received a $25,000 grant as part of a non-profit partnership between celebrity chef Guy Fieri and the California Restaurant Foundation.
"Due to unforeseen circumstances the food truck is now permanently closed," read the closure announcement on Rollin Roots Instagram page. "As many of you know I am the sole owner of Rollin roots, as less of you know, there have been a lot of difficulties recently. A lot of them have been directly due to my race and have made it very difficult to expand my business due to these barriers and consistently arising issues. Because of the incident from this mornings/last night (whenever it happened) the food truck is now permanently out of commission. I have been dealing with most of these issues in silence and still I’m not sure if I want to air things out because there’s no real good that will do."
Over the weekend, a fire caused extensive damage to the Rollin Roots food truck at its location at 8040 Armour Street in Kearny Mesa, essentially totaling the vehicle. The investigation into its cause has been concluded as "undetermined". Despite Hartsfield's conclusion the fire was caused by arson, a San Diego Police Department representative has stated the incident is not being investigated as such.
"MAST fire investigators responded to this call on 10/03/2021 with Eastern patrol," explained San Diego Police Department Public Information Officer, Lieutenant Adam Sharki. "The cause of the fire was undetermined by the investigators due to the damage. It is not being investigating as an arson at this time.  However, the victim claimed items or money was stolen from the vehicle on a previous date. Eastern patrol took a crime report on that. The fire damage was listed at about $25k. Unfortunately there is an active investigation, so I can’t get into too many more details right now. Eastern Division investigators took a report regarding property previously stolen from the vehicle. I believe the type code for the crime case is 'auto burglary.'"
Despite San Diego Police asserting their investigation into this situation is ongoing, an email Hartsfield received from an SDPD Officer stated that he didn't "see anything of evidentiary value to conduct a follow-up on." The officer goes on to suggest Hartsfield locate surveillance video footage himself.  In addition to working on a claim through his own business insurance policy, Chef Harsfield has launched a GoFundMe in hopes of raising capital to assist in lost income and the replacement costs for the Rolling Roots food truck. Hartsfield was leasing the truck that burned down, which was allegedly fully insured by the owner.
"Now I have reached the point of being fed the fuck up, and currently I cannot imagine continuing on with my business with so many things getting in the way," continued Harsfield in his announcement about the closure of Rollin Roots. "I have been in the restaurant industry for 11 years and was pretty well prepared for opening my own business, but was nowhere near prepared for this other shit. I will be taking some time to contemplate wether [sic] or not I should continue an uphill battle to operate my business or just say it was a good run while it lasted and close down. I will have an update soon but for now the restaurant remains open and I will post again when I have the capacity. I’m pretty sure I’ll be speaking to the police department all day as they evaluate this as a potential hate crime, so please try and keep from reaching out as I am already pretty overwhelmed".
For more information, visit rollinrootssd.com and check out the Instagram post below.