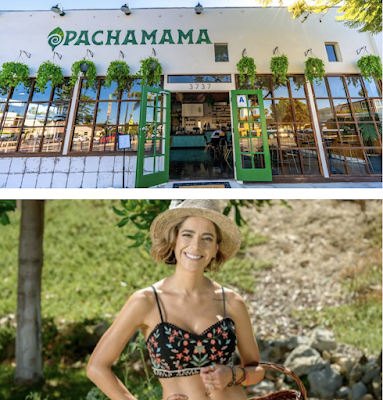 Pachamama opened in October 2019 in the space that previously housed Cafe Cabaret in San Diego's Normal Height neighborhood. The mostly-organic South American fusion restaurant was founded by Maria Victoria "Vick" Vannucci, a former tennis professional and model who previously lived in Miami from 2016 until relocating to San Diego. Vannucci had left her home country of Argentina after a series of controversies that included backlash due to the dissemination of images of her and husband & media model Matias Garfunkel posing with hunted wild animals in Africa.

The distribution of the photos of Vannucci with big game animals resulted in the businesswoman filing a successful lawsuit against both her hometown municipality and social media behemoth Twitter. Vannucci's allegedly estranged husband was also charged for smuggling millions of dollars worth of art. Vannucci hoped to start anew in San Diego, even vowing to donate a portion of profits to go toward protecting endangered animal species, but controversy continued to surround her, from being accused to speeding her luxury car around San Diego to allegedly calling the police on former employees.
After being open over Halloween weekend, Pachamama suddenly closed this week. It was reported that a moving truck was sighted outside of the restaurant emptying equipment and furniture from the building, and nobody is answering the phone despite the restaurant being listed as open. Vannucci has stated she intends to move to the Los Angeles area and open a new restaurant in Venice Beach, CA.
"My aggrement ended this pass Sunday," explained Pachamama owner Vick Vannucci. "We did a party for friends/team/customer and we even ended with a beautiful fundraiser for San Diego Humane Society. I'm grateful for all the good moments that I live in this beautiful community and I can say with pride that Pachamamas mission will continue in Los Angeles. Pachamama is a mission concept and a new community is waiting. I will always always love my San Diego community, I grew as a person and as a business lady here!!! I only have good things to say part of my heart is forever here and I wish the best for the new tenant to come!!!  Tonight we are publishing in our social platforms all the good deeds that we did together in our time in Normal Heights - we build gardens, we built awareness, we save thousands of bees together and so much more. Gracias, San Diego for being my home."


This is a developing story. We will update this post as we learn more.
‹
›
Home
View web version