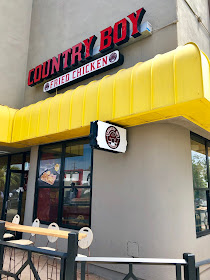 Sean Fitzhugh operated a similar concept as Twins Chicken in the Seattle area of Washington before relocating to San Diego to open Country Boy Fried Chicken. The eatery offered what was likely too concise a menu centered around twice-fried chicken tenders available only in original & spicy styles and served in combo platters with homemade rolls, crinkle-cut fries and one single style spicy sauce. Fitzhugh hoped his concept would grow to become a global franchise similar to Raising Cane's Chicken Fingers, which launched its first location in San Diego earlier this year and is in the process of launching a second area outpost at 8223 Mira Mesa Boulevard in Mira Mesa.

"I got killed being delayed 6 months with inspections," explained Fitzhugh. "In too big a hole to get out with current sales. Leaving California, going back to Washington."
‹
›
Home
View web version