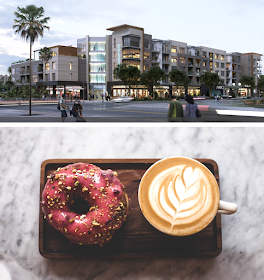 Coming to San Diego's North County is an outpost of Parlor Doughnuts, a popular made-to-order donut shop and cafe based out of Indiana.

One of the first retail tenants signed on for Oceanside's incoming mixed-use SALT development is Parlor Doughnut. This 6 month old customizable donut cafe concept is the product of Indiana-based restaurateur Josh Tudela, who opened the first outpost in Evansville, IN, earlier this year with a second on the way. Parlor serves a variety of signature donuts baked fresh to order, including favorites like Butterfinger, French Toast, and Raspberry Pistachio. There is also the ability to customize donuts with a variety of glazes and toppings. The eatery rounds out its menu with an array of coffee and espresso drinks, as well as Cronies & Cream - mini donut holes paired with soft serve ice cream.