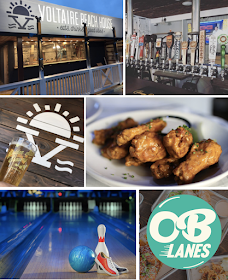 It was announced more than a year ago that Ocean Beach's Voltaire Beach House had plans to expand into the neighboring space that previously housed a local caterer for the opening of a 4-lane bowling alley called OB Lanes. After much speculation on whether the project would ever come to fruition, the company took to social media today to announce that OB Lanes is not happening.

Voltaire Beach House is a Nantucket-inspired, open-air bar and restaurant that was opened in January 2017 by restaurateurs David Schiffman, George Somers and Mark Huber - who also have ownership interests in San Diego Double Deuce, Whiskey Girl, The Horn and The Rabbit Hole. Last spring after Chef Nick Brune's EcoCaters relocated, Voltaire Beach House took over the nearly 5,000 square-foot adjacent property with the aim of bringing a classic bowling alley experience to Ocean Beach. OB Lanes was to offer a four-lane bowling alley open to the general public and available for private events but

"Due to unforeseen circumstances Voltaire Beach House will not be expanding to feature OB Lanes," read a post on VBH's Facebook page earlier today. "We want to thank OB residents, the town council and others for all their positive support on the project and truly wish we could have made it happen."

Ocean Beach residents have been protesting new liquor licenses in recent times, so we surmise backlash. We also heard rumors that the city shut down the project due to issues with the design plans. We reached out to company representatives for a comment but did not receive a response by the time of publishing.