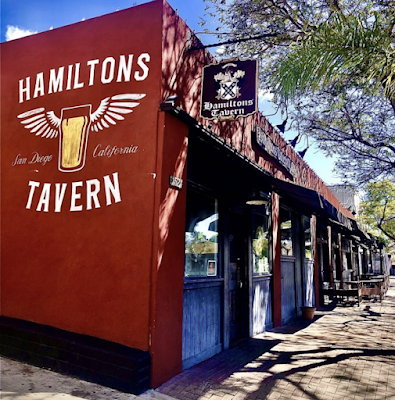 October 8, 2021
The team behind San Diego's Bottlecraft bottle shop & bar concept has taken over the South Park space that long housed Hamilton's Tavern and will open an Old World-style pub and eatery called Bock Bar.
Following a fire last fall and abundant allegations of impropriety against its owner, Hamilton's Tavern confirmed it would not be reopening last July after a 14 year tenure as a top beer bar in San Diego's South Park. Hamilton's Tavern was founded in 2006 and was long known as one of San Diego's original craft beer bars. Ownership opened South Park Brewing Company in the neighboring space in 2014. In November 2020, a fire that broke out that caused more than $1 million damage to Hamilton's Tavern and South Park Brewing Company. Both concepts were owned by Scot Donovan Blair, who was outspoken about his opposition to the forced shutdowns during the COVID-19 era and was named several times in damning accusations on Brienne Allan's viral @RatMagnet Instagram posts that took the craft beer industry by storm earlier this year.
The former Hamilton's Tavern space has been taken over by Brian Jensen, the founder of seven locations of Bottlecraft craft beer bar and bottle shop and branches of Vino Carta Wine Store and Bar in Little Italy and Solana Beach. In the building, which the landlord had to completely gut due to the fire, Jensen will open a new craft beer-forward bar named Bock, which will be heavily inspired by Hamilton's Tavern and other Old World neighborhood pubs. While the concept is still very much in development, Bock will offer a German tavern vibe with a curated selection of American craft brews and foreign beers. There will also be a gastropub-style food menu.